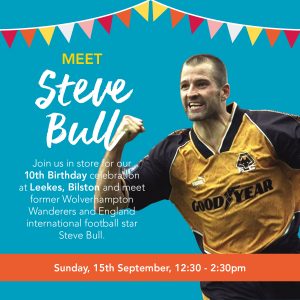 An Evening with Steve Bull

All tickets £21.00, no concessions.  Price includes a booking fee.

Bully talks in depth with broadcaster, writer and Wolves supporter Johnny Phillips. Hear about how he made it from the factory floor to become a record breaking goal scorer at Wolves, with his tales from life inside the dressing room at Wolves and England. With stories about his team-mates on the pitch and his managers at Molineux – the good, the bad and the colourful times – the evening will round off with questions from the audience.

Steve is available to book for personal appearances, and you can book his services for the following.

Store Openings – Raise the profile of your new business
Media Days – Steve has been a popular figure with the media for 30 years.
Product Launches – Book Steve to attend your new product launch
Private occasions to include weddings and birthdays – Book Steve as a surprise guest to turn at a wedding day as a gift to the bride and groom or a surprise guest at that special birthday
After Dinner Speaking – Steve has been on the after dinner circuit now for over 15 years and will deliver a 45 minute entertaining speech with a few questions and answers thrown in

Just wanted to extend a huge thank you to you and Steve on behalf of all the guests and in particular the Farrington family – Steve was a gentleman and made the day incredibly more special, not just with his appearance but also how he handled the attention with grace and interacted with everybody with genuine enthusiasm. He really is a legend. Also I appreciate your help in arranging it all so smoothly and efficiently, still can’t quite believe it happened! Best wishes to you both for the future and hopefully I’ll be in touch to do this all again!   Thanks againRakesh
Kirsty, Please pass on my thanks to Steve again from my Dad Pete and all our family – we all enjoyed spending time with Steve and I know that my Dad was thrilled beyond words and really moved by Steve’s personal touch – thanks so much for making my Dad’s birthday celebrations really special. All the very bestDerek
Thank you very much for your help in providing Steve Bull as speaker at our first sportsman’s dinner. Steve was very entertaining and a great help with the auction also. Having attended dinners myself previously I would say that Steve was on par with the best speakers I have seen and he was brilliant with all the Wolves fans that attended I hope that he didn’t mind us sitting him with them!
Hi Kirsty I would like to say a big thankyou from everybody for yourself for organising, and Steve to come and see us all Saturday—Steve is a great down to earth fella who has gained even more respect from myself, family and all the lads who attended Saturday. I have attached a picture of me, Chris (my brother), my dad, and Steve. Richard Wright
I would like to say a huge thank you to Steve Bull MBE for his professionalism and friendly approach when he attended our butters john bee branch opening in Wolverhampton on Saturday 11th April 2015. We wanted a well known and much loved Wolverhampton celebrity to cut the ribbon on our open day.  Steve really did pull in the public who all came to see him and have their photograph taken with him, quoting that he was “their hero”.  Autographs were no problem and Steve came well organised and even signed football shirts for anyone that had one.  Not only did he put the public at ease but helped staff to make the best of the promotional photographs.  Steve could not do enough to make the day special for everyone and I would not hesitate to recommend him for any public or private event you may have planned.  Thanks again Steve you are our “hero” now! Dawn Dickinson, Wolverhampton Branch Manager, Butters John Bee
Hi Kirsty Please thank Steve for his time yesterday to attend my Dads 60th Birthday party, it was lovely to meet him, especially someone as genuine as he is. It made dad’s decade! Many thanks Nicola Millinson
Hello Steve, Last nights dinner went exceptionally well. Dave was THRILLED and a bit gob smacked by Steve being there. It seems he didn’t get wind of it as we feared, so was completely surprised. And I know the offer of dinner and a match went down very well. Steve was swamped by people, so Dave hardly had time to speak to him afterwards! 😀 I think it made the night a bit less emotional (if that makes sense) so Dave had something else to focus on. Thank you so much for sorting all this out Kindest regards and huge thanks Victoria Johnson, Events Manager, Zurich Insurance
Hi Steve & Kirsty I just had to send you a quick mail to say ‘thank you’ to Steve for his appearance at the wedding reception of my mate Sean and his now wife, Nancy, last weekend in Chelmsford……Steve, you have no idea just how much it meant to Sean to see his all time hero at his wedding….You often hear people talk about how it is not always a good idea to meet your heroes but that couldn’t be more wrong when it comes to Steve….I’m no doubt that there are plenty of other ‘heroes’ out there who just go through the motions at this kind of do….What struck me the most was the fact that Steve genuinely seemed to want to be there and hopefully even enjoyed it, even though he had put up with me (best man, the Arsenal fan) bombarding him with questions! Anyway, I just wanted to say a personal thanks to Steve for helping to make it a fantastic day… Thanks again Steve
Hi Steve & Kirsty, I just wanted to say my Dad loved it and was very surprised. Please pass on my thanks to Steve he was great with everything such a pleasure to have at the BBQ. Thank you again for all your help and Steve coming to a random person BBQ I hope it wasn’t too painful. I would just like to thanks Steve for opening our new office on Friday. The day went really well, we had a great turnout and Steve was a true gentleman. Jason and Luke, Peopleplus Recruitment
I just wanted to say thanks to Steve for coming along and making my event such a success on Thursday. The night went really well, he was a fantastic guest, funny and so approachable, I’ve had loads of great feedback and people were impressed at how ‘normal’ he was! Nicola Westwood, Capgermini UK PLC