The Steve Bull Foundation has been instrumental in funding some of the Grand Theatre’s community projects and resources over the last three years. This includes the installation of the state-of-the-art Audio Description units for visually impaired patrons; funding the annual Introduction To Pantomime tour which visited children’s wards and hospices and support of the very first Grand Theatre fundraising golf day. 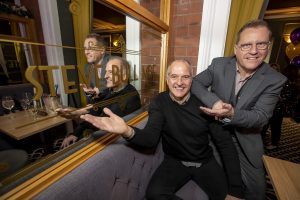 As a Grand Theatre Ambassador, Steve will continue to support the theatre with some exciting projects in the future.

As a thank you for his commitment the theatre has renamed the VIP Gatsby Booth in the Dress Circle as The Steve Bull Booth, sponsored by Britvic. Patrons will be able to book this booth to use an hour before a show of their choice with a hospitality package.

Vicky Price, Associate Director of Communications and Development said, “I am beyond thrilled that we can honour Steve in this way and say thank you for all the support he has given the theatre. Some truly fantastic community projects wouldn’t have happened without his support and for this we are truly grateful.”

Steve said, “Like the Wolves, the theatre is a vital part of Wolverhampton City Centre. The foundation strives to support local people, and this is exactly what the theatre does. The quality of the shows that are put on the stage along with the staff are superb and I hope that my Ambassador role will encourage more people to attend.”